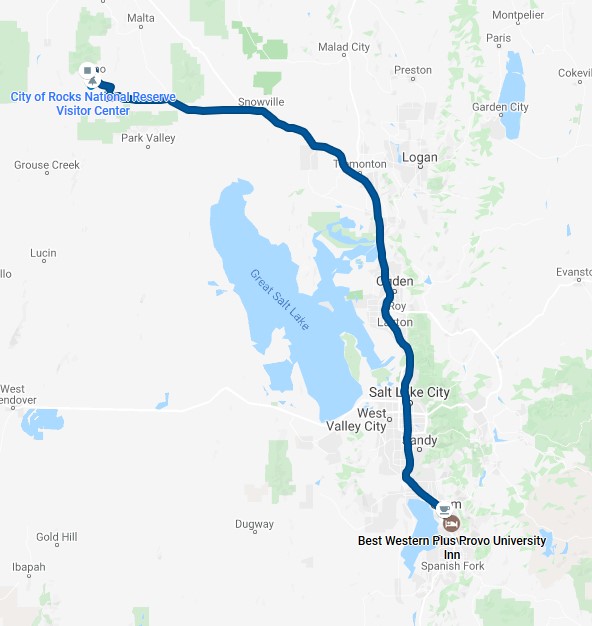 Day 5, 9/13/20: As part of my research for the trip, I looked into lots of climbing areas throughout the USA that would be perfect for me and Max. We aren’t very experienced trad climbers (placing our own protection in the rock), and cannot climb very high grades, but we love scenery and multipitch climbing. Unfortunately, there are very few areas that have good, moderate, multipitch sport climbing, meaning bolts are pre-drilled into the wall and the climb is separated into multiple rope lengths. However, one such area that does have it is a protected area in the middle of Idaho split into two parks called City of Rocks National Reserve and Castle Rocks State Park. While it is a huge climbing area with over 600 routes of sport multipitch, trad, and single pitch climbing, and only 3-4 hours out from Salt Lake City, it is much less crowded or well known. I believe most Utah residents stay in the area or head to Moab. Anyway, we decided to take a bit of a detour on our drive to climb here, as it offered us exactly what we wanted in our climbing.

Originally, we considered stopping to check out Salt Lake City, but decided just to skip it and drive through. After some interstate driving through Idaho, we were surprised that Google Maps navigated us to a dirt road to get to our destination. This climbing area was more rural than we thought. After driving what must have been over 60 miles on dirt roads with nothing but plain desert around us, we finally reached a small paved area, with a one-stop-shop called Rock City, a visitor center with water and bathrooms, and a single gas station. Dirt roads led to hazy granite outcroppings in the distance, but some smoke from the wildfire made it difficult to see. For a little while, Max and I doubted that this place even existed. 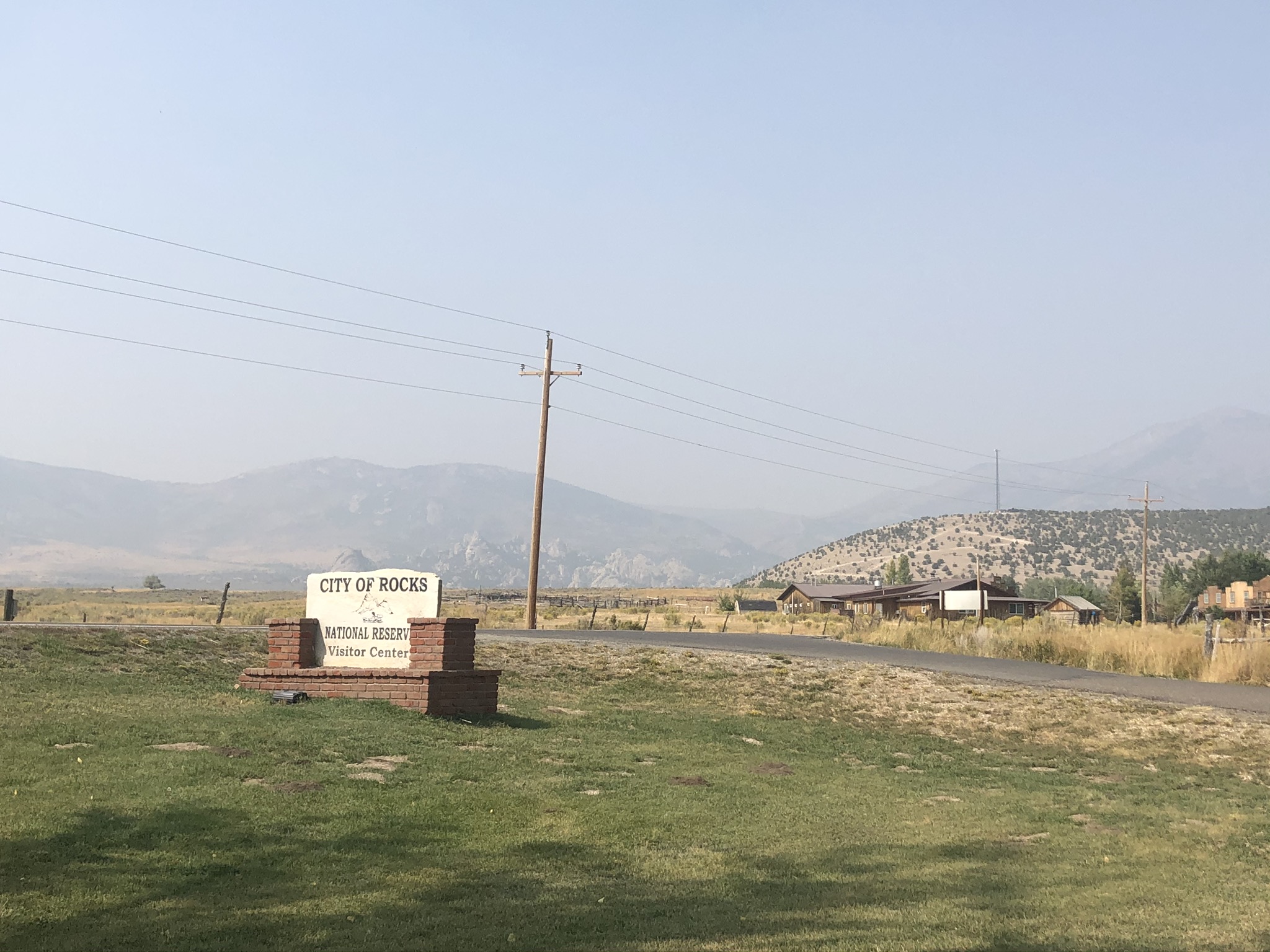 We grabbed some pizza from Rock City, and decided to head up to Castle Rocks SP for some late afternoon climbing. When we pulled into the parking lot, we were the only car there, and we set off for the rocks in the distance. The smoke and lack of mountains/trees made it difficult to judge scale, but the rocks just kept getting bigger and bigger, and we soon realized how randomly amazing this area really was. Tons of gorgeous granite domes 500-700 feet tall all around, with some short and beautiful trees. After a few days in the desert, it was nice to see a bit more lush of an area, even though it was still surrounded by desert below it. The climbing was excellent, weather was perfect, and overall it was a very laid back and stressless day. 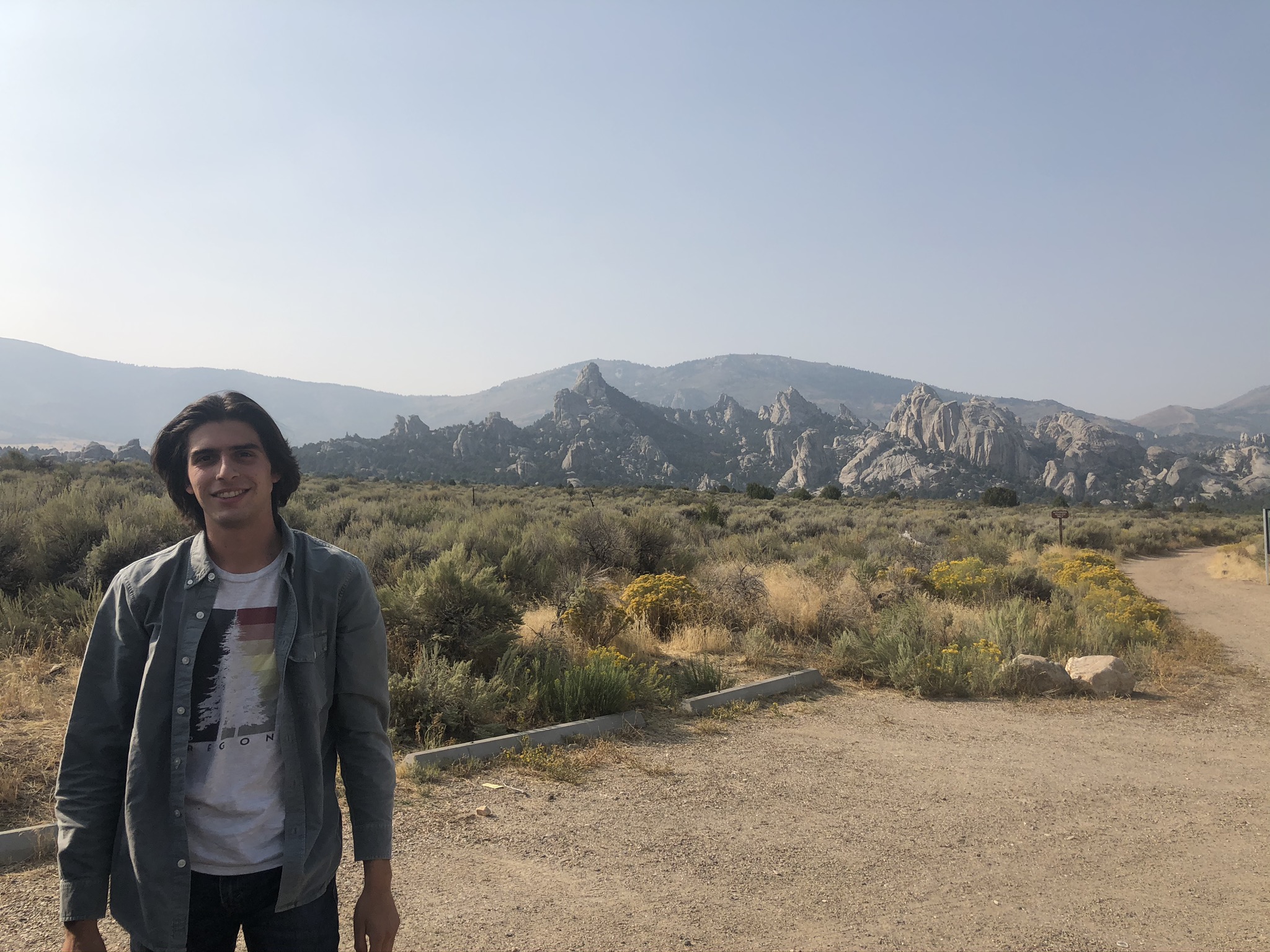 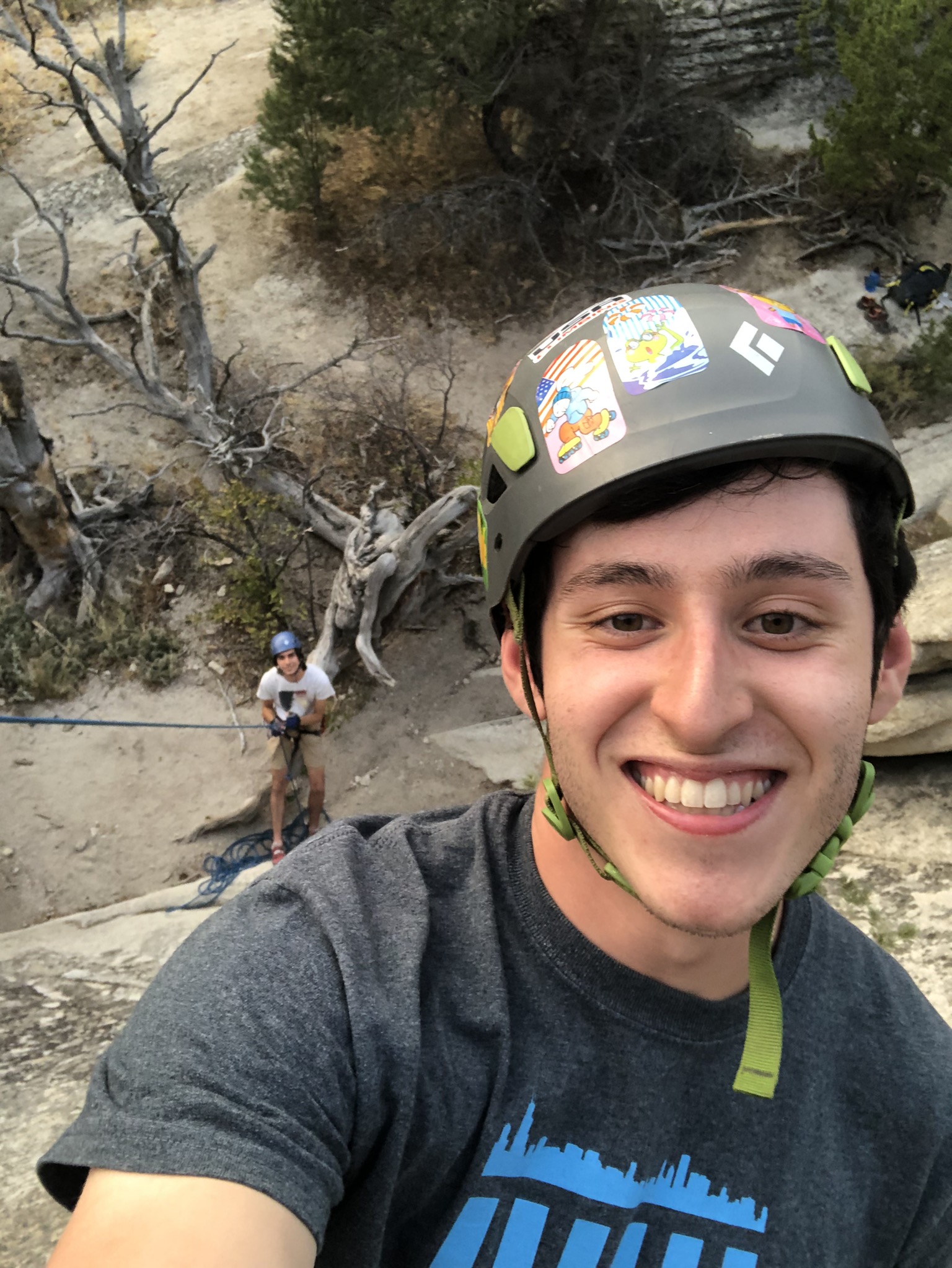 This place is so out there, that there is an open range within the park, and the cows blocked the exit gate when we were leaving! Here’s a funny video of us trying to honk them away.

Finally, we decided to camp on this “developed” BLM campsite that we found online, but the extent of its development seemed to be a single port-a-potty. Oh, and the rockiest road I have ever driven on. Clearly meant for off-roading vehicles, but the Mazda handled it fine. Finally, enjoy some cursed photos of Max and I making some ramen with soft boiled eggs with headlamps on the ground at around 10 pm. 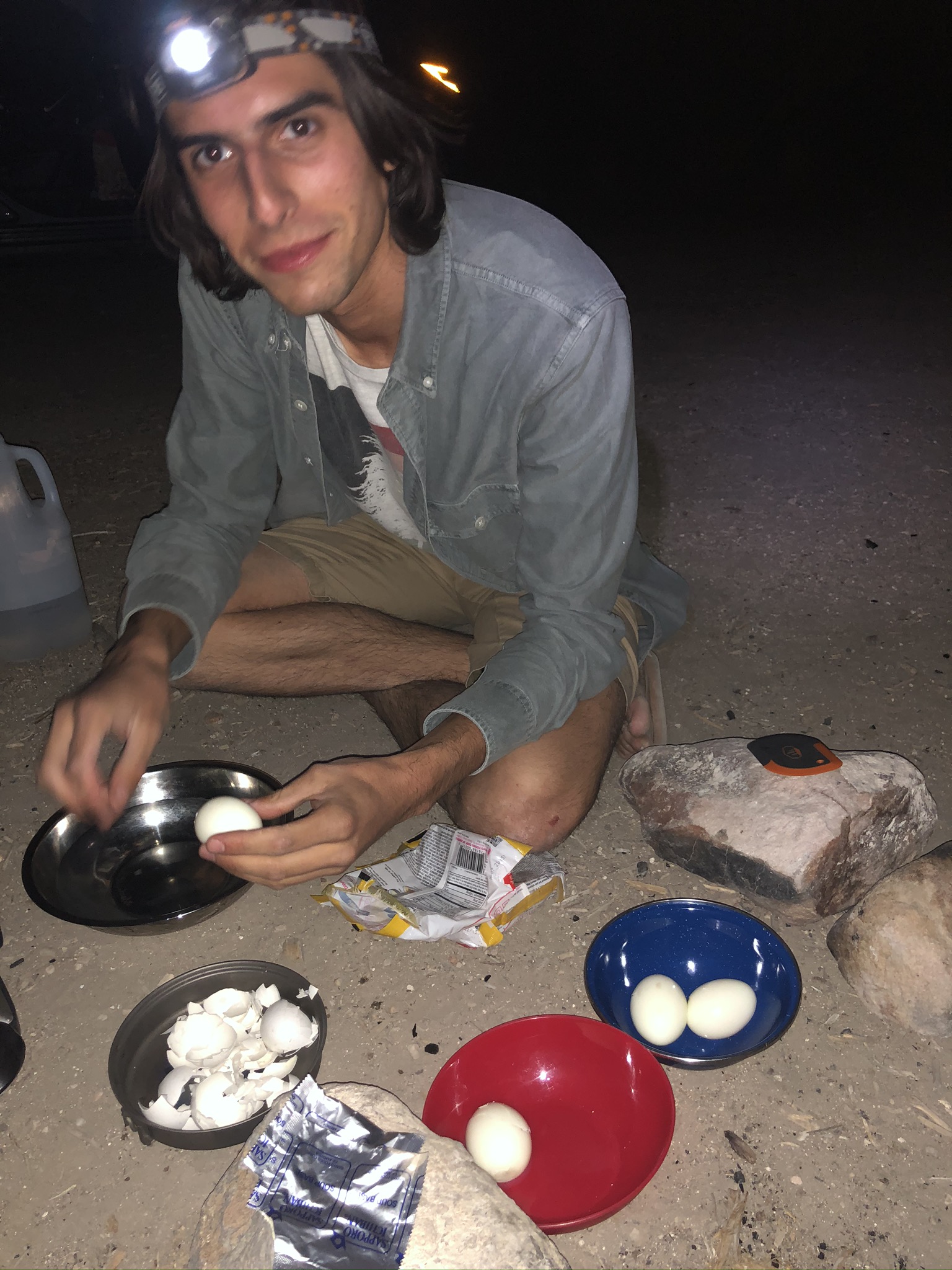 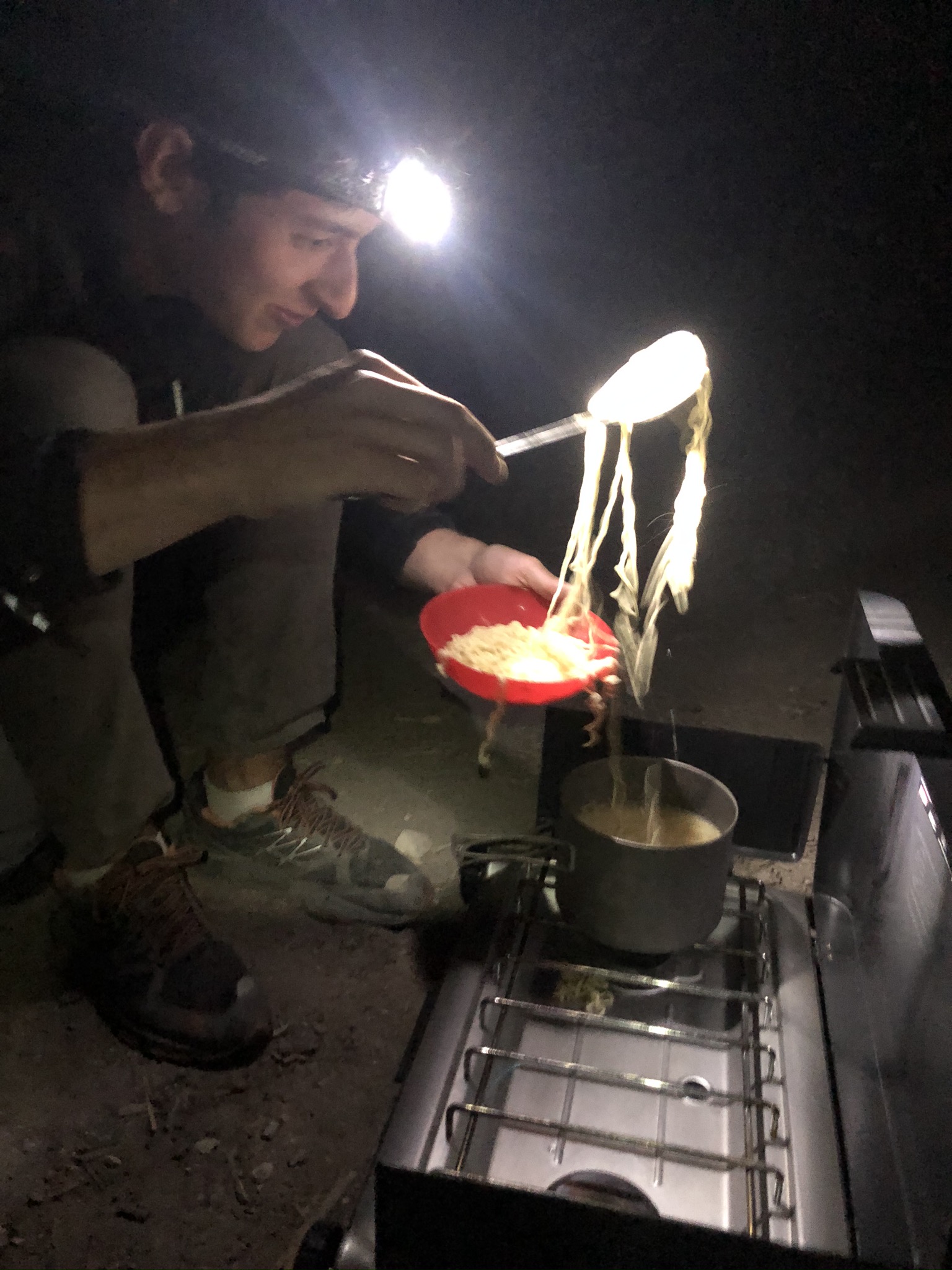